For anyone following along, we’ve now reached some nastiness. I’ve featured many of Tom Savini’s special effects on this list, but this one has extra Savini and I think you’re gonna like it. Coming in as #8 on the list is William Lustig’s cult horror classic, Maniac (1980). 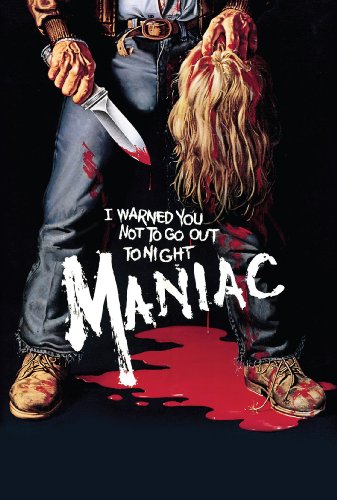 Now we’re getting our hands dirty. In this film the protagonist is also the antagonist, which is a narrative choice that I enjoy when it’s done right. Rarely are we so close to the killer in horror films (think Henry: Portrait of a Serial Killer (1986), American Psycho (2000) or Man Bites Dog (1992)). Usually the film revolves around a person or a group of people being picked off, with one character in particular being the main focus; the ubiquitous

trope of the “final girl”. But William Lustig decided we’d be spending our time with Frank (the ever-creepy Joe Spinell), a psychotic killer with mommy issues (sound familiar?) who kills women and takes their scalps to put on his mannequins. So, like I said, this one is a little nasty.

I watched this with my girlfriend a couple years ago and just hearing Frank’s incessant breathing sounds made her queasy. And that’s a motif used throughout the film. It’s another element that makes the film genuinely chilling and gross, like you need to

shower after seeing it. But, nastiness aside, it’s an effective film and one I strangely enjoyed.

The scene we have today not only has an amazing Tom Savini special effect, but the scene also stars Tom Savini! In other words, he kills himself in this scene, which I can imagine is either super fun or a roller-coaster of existential dread.

Savini is only credited as “Disco Boy”, and his partner is played by Hyla Marrow, who is credited as “Disco Girl”. So, we’re not dealing with essential characters here, but the kill is still impactful because of its staging and Savini’s effects.

Disco Boy and Disco Girl are parked in his car and they decide to fool around in the backseat. We see that Frank is present as well because there’s a shot of his feet stepping out of his car as the two lovers get out to change position in their car.

While they’re fooling around, suddenly Frank’s face appears in the window of the car,

watching them like the creeper he is. For a few seconds nobody notices him. The two continue enjoying their tryst, unaware of the peeper outside the car.

But then the girl sees Frank and freaks out, which is a perfectly reasonable response if you ask me. Disco Boy looks around and doesn’t see anyone, so he thinks everything is fine. But everything is not fine. The girl insists on leaving and they get back into the front seat. He turns the car on and hits the switch for the headlights, and boom….it illuminates Frank standing in front of the car. He stares at them for a few seconds and the two in the car are a little freaked out.

Then, we get the money shot, in slow-motion no less. Frank hops up on the hood of the car, crouches down and aims a shotgun directly at Disco Boy. And then….

. We see his head blasted to pieces in slow-motion and blood flying onto Disco Girl as she flips out. It’s so matter-of-fact and stunningly quick but the camera lingers on the devastation and cuts back to it multiple times, which makes it stand-out. I usually shy away from kills with guns because they’re rarely interesting, but this one is insane times a thousand.

That’s it for this kill. I hope you enjoy the video and don’t forget to check back on Monday for #7 on my list of The Best Horror Movie Kills of All-Time!