Here I go again, breaking my own rules. Just as I did with Friday the 13th, I’m choosing two kills for this entry. However, this go-round the decision was not made based on the volume of films or kills, but rather on the style of the kill and the effectiveness of the scares they create. Coming in at #7 is Scott Derrickson’s horror mystery, Sinister.

I can recall seeing this on the big screen with some level of anticipation. The buzz on the film was touting it as one of the scariest movies ever made, which is as bold a claim as one can make within the horror genre. Of course, 99% of the time I’m dubious of any claim made in the marketing pitch because making outrageous statements is the name of the game in film advertising. And it’s even worse now with the plethora of quotes pulled from bloggers and, many times, anonymous Twitter users.

But Sinister seemed different. Don’t get me wrong, I had no expectation of the film reaching the heights of “scariest movie ever made”, but for me the trailers really sold the eerie tone of the film and the otherworldly element so essential to the film’s mystery. You knew walking into the theater that this wasn’t a whodunit about a man in a mask or anything else of this world, yet the scares they teased seemed rooted in reality.

The first kill I’m choosing is literally the very fitst scene of the film and one of the primary images used in the trailers. For a change, I’ll regale you with the clip before I go any further.

It doesn’t get much more nightmarish than this. What strikes me is how disturbing the imagery is on many different levels, which is accomplished a few different ways.

The first is the quality of the 8mm film strip that sets the tone for what’s to come. Oftentimes these grainy, film-within-a-film techniques are used to convey nostalgia or wholesomeness in the form of family home videos, so we make that association right away. We haven’t been told anything in the film at this time, but we already know that these aren’t four strangers, they’re a family. Director Scott Derrickson uses the 8mm films as a means of subverting and twisting the association. These film strips are family home videos, but not the kind the family gets to enjoy.

The staging of the scene also creates a sense of disturbing that which is generally considered safe and happy. The alignment of the family members is very typical, and

very much like a child might draw a family dynamic. It starts on the left with, presumably, the youngest child and increases in traditional family stature until we reach, again presumably, dad on the far right. It’s a perversion of the stick figure family adhesives that adorn the back windows of minivans we see so often on the road.

The last means used is the slow-motion effect. At first glance, we see the family is bound, bagged, and tied around the neck with a noose that is lassoed to the tree branch above. This is horrifying enough, but they’re not standing on chairs so there appears to be no method of hanging these people. But, as our eyes wander the frame we can pick out what appears to be a rigging system that mirrors a common pulley. Further examination leads to the discovery of a pole saw that is cutting the branch the rig is ultimately tethered to. The only option left for us to do is watch until the saw finishes its job.

Using the slow motion makes that far more of an excruciating tension. We think this family is going to be hanged, but who knows? Surely enough, though, the pole saw finishes its duty and the descending branch causes the pulley to work to perfection and

the family slowly rises off the ground, limbs flailing in desperation. Again, the slow motion unsettles because we witness their legs hopelessly grasping for the ground below for far longer than is comfortable. It’s truly an effective way to ingrain the horrific tone Derrickson was aiming for to open the film.

The next kill happens a little later in the film. The plot of the film follows true-crime writer Ellison Oswalt (Ethan Hawke) as he tries to piece together a mystery about a bunch of murders seemingly committed by a serial killer dating back to the 1960’s. The family moves into their new home and Ellison finds a box of the 8mm films in the attic and parses through them. This is where the film of family being hanged is found, among many others. We get to see more of that film, part which takes place before the family meets their grim demise, showing them having a good ol’ time in the backyard.

The one that affected me the most is entitled “Lawn Work”. Simple set-up: via 1st person POV, someone spies on a family watching TV in their living room from outside of a house. After a few time edits, the person walks around the house and opens a gate leading into the backyard and finds a lawnmower.

At this point, we have to assume something terrible is going to happen purely based on what we’ve seen in each previous film strip. The use of darkness around the single, low 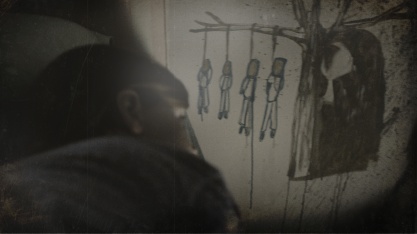 quality beam of a flashlight is the tension builder here. The light maintains focus on the lawnmower and perhaps a space of no more than a foot in front of the mower, and the POV never wavers from this angle.

The mower is started and begins moving forward, first over the concrete patio and then it starts to makes its way across the lawn. Again, we don’t know which part of the lawn this is, how big the yard is, if there are any obstacles in front of the mower, etc, because Derrickson doesn’t allow us to see the answer to the question on every viewer’s mind: what is in the path of this lawnmower?

Unlike the first film strip, this one is in real-time, which serves the dreadful purpose of this scene perfectly. The mower moves briskly across the lawn, filling the viewer with absolute terror at what it will eventually run over.

And then suddenly we catch a glimpse of color, and just as your brain realizes the most harrowing thing possible, IT’S A PERSON’S FACE (!!!), Derrickson cuts away to Ellison

who promptly jumps back almost as far as everyone in the theater did when I saw it. The film gives us a musical sting sound effect at just the right moment, providing this scene with all the external element it needs to work like a charm.

Horror filmmakers should take notes on this scene as it is a masterclass of a jump scare. That term has a profoundly negative connotation given the overuse of immaterial jump scares in horror, and more importantly, recent horror. But here it’s used perfectly and produces a truly scary kill for the ages.

Alright, I hope you all enjoy the video as much as I did, and don’t forget to check back on Thursday to find out which scene is #6 on my list The Best Horror Movie Kills of All-Time!