This is it….the moment we’ve all been waiting for! The cream of the scream! The (dream) master of disaster! The baron of burn!

My 100th post on this blog and the culmination of a months long project all coincide for one momentous occasion. 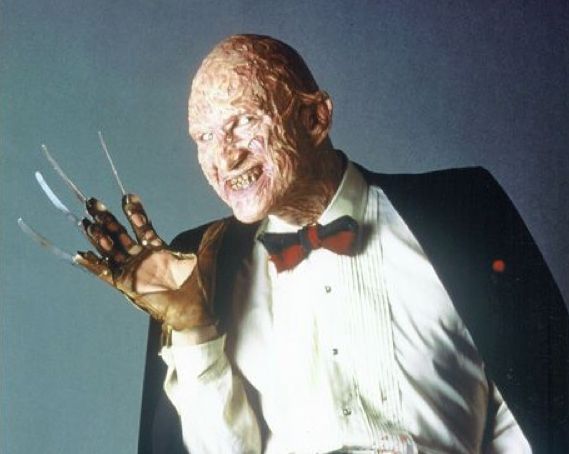 I hope you’re all wearing your fedoras, razor gloves, and Christmas sweaters, because slicing and dicing its way through all challengers is my #1 horror movie kill of all-time: Tina’s dance with Freddy in Wes Craven’s surreal masterpiece, A Nightmare on Elm Street. 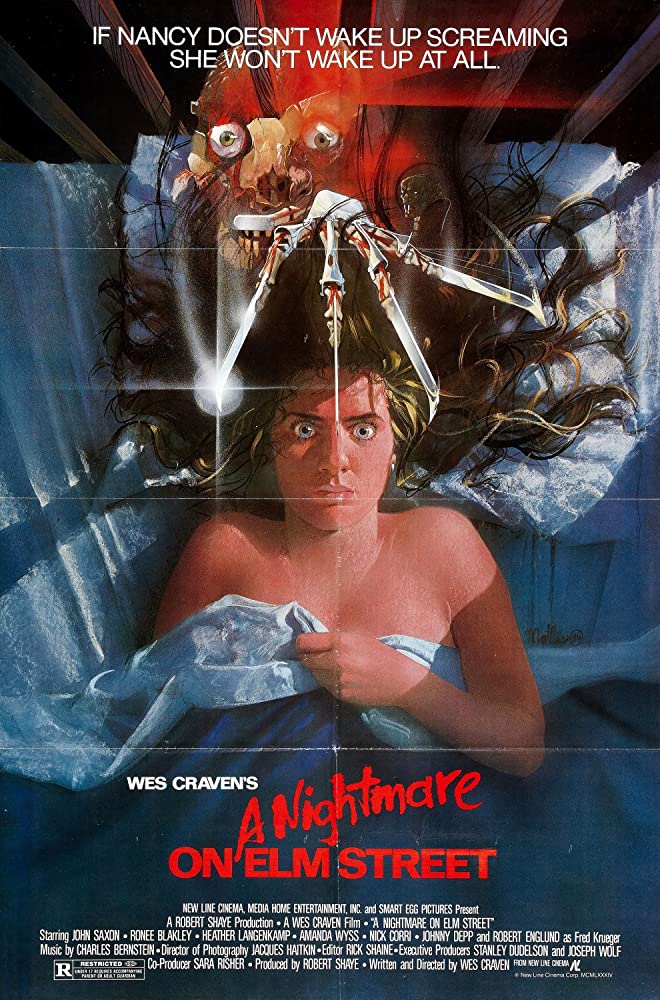 I have to start by saying this choice never wavered; it was my top pick from day 1 of this project. This is the film that scared me well into my teenage years, and perhaps beyond.

I came to this franchise by way of A Nightmare on Elm Street 3: Dream Warriors (1987) when I was quite young, and it was Phillip’s (Bradley Gregg) death that scarred my psyche back then. That particular kill, where a puppet morphs into Freddy (Robert Englund), who then grows to full size, slices Phillip’s arms and legs open, puppeteers him through the mental institution with his exposed tendons, and then drops him out of a high window to his death, was the scariest freaking thing I had ever seen. And that stood as the scariest kill for me for a long time.

Until I worked up the courage to watch Wes Craven’s original.

the dead to haunt the dreams of the kids whose parents hunted him down and burned him alive is an uneasiness about reality. In this world, dreams and reality often blur together to form waking nightmares. If you fall asleep and die, you don’t wake up.

It boils down to one thing: control.

The fear of being in uncontrollable situations has long been a major factor in what kind of horror affects me. There are a number of kills on this list that illustrate that fear quite succinctly, but none embody this principle like A Nightmare on Elm Street.

Often in horror (as well as many other genres), the characters must make decisions that ultimately affect whether they will survive. Ultimately, that’s how all stories are told:

through characters’ choices. Dumb characters go through the cliched motions and wind up dead because they investigated a strange noise, or split up when they should have stayed together, or went skinny dipping alone at night, or they read some incantation from a book, etc, etc. The characters lack the insight the audience has because of the knowledge base we bring to these films, but they still have the option of making a different decision.

However, in this film, what decision can be made to save your life? Everyone has to sleep; it’s a fact of life. Now, some characters in this franchise make greater efforts to stay awake than others, but at some point they all succumb to the body’s need for sleep. And when that happens, you’re in Freddy’s world.

There are a number of kills from this franchise I could have chosen; by nature of the

beast, the creativity in these films is exceptional. I already mentioned Phillip’s death as a stand-out in part 3, which also has an excellent kill where Freddy injects needles into little suckling mouths on Taryn’s (Jennifer Rubin) arms, but there’s also Debbie’s (Brooke Theiss) death in part 4 where Freddy turns her into a cockroach.  Another great one is Glen (Johnny Depp’s first film role) being sucked into his bed and the ensuing blood geyser in the first film.

But Tina’s (Amanda Wyss) is the one. The holy frijole. And she’s the first one to go.

Can you imagine that? Let’s say it’s 1984. The horror genre is just passing the crest of the slasher craze, which has seen the rise of icons like Michael Myers and Jason Voorhees. By the time A Nightmare on Elm Street came out there had already been three Halloween

films and FOUR Friday the 13th films alone, never mind other genre staples such as Maniac, Sleepaway Camp, The Burning, My Bloody Valentine, Tourist Trap, Pieces, Slumber Party Massacre, et al. So if you’re a horror fan in the 70’s and 80’s you would known the formula and would have seen all kinds of killings, mostly involving knives, chainsaws, axes, machetes, needles, pitchforks, arrows, spears, scissors, and other pointed (phallic) weapons.

Then you sit down in the theater to watch this film. The first images show a weapon being made: a dirty glove with four razor blades on the fingers. You’re probably thinking, “Alright, that’s kinda cool. I’ve never seen that before.” Then you get that first dream sequence where Tina is being chased and tormented in a nondescript boiler room, and she is ultimately scared awake.

Seems different from a pick-axe or driller killer, right?

After the rest of the cast is introduced the next day, it becomes night and then the second

dream begins. Tina is sleeping in bed with her boyfriend, Rod (Jsu Garcia – credited as “Nick Corri”), and hears rocks bouncing off the window. She gets up to take a look, meanwhile we see Tina’s best friend, Nancy (Heather Langenkamp), sleeping alone in another room in the same house. Suddenly a face and two hands press through the wall above Nancy’s bed while she sleeps.

Nancy wakes up as the face disappears back into the wall, but Tina decides to go outside and confront whoever is taunting her. She walks out in the alley, coerced by a sinister whisper in the darkness calling out “Tinaaa”.

A garbage can lid rolls across the concrete behind her, and then a shadow appears: a silhouette of a man in a hat. Tina watches as the man approaches from the blackness.

It’s hard to make out, but the skin on his face appears burnt off, and his malevolent

laugh echos in her ears. The man’s arms begin to stretch out unnaturally, consuming the alley as the blades on his glove scrape and spark on the steel wall.

At this point you’re thinking, “What the fuck is going on here? This is terrifying in a way I’ve never seen”.

Tina calls out for God’s help. The man holds up his hellish glove and sneers, “This…is God”.

A chase ensues as the burnt man torments her some more, before suddenly Tina is back in bed with Rod – but they’re not alone. She flails on the bed begging for help as Rod stammers to his feet and yanks the covers off of Tina. But there’s no one but Tina there.

Then her shirt rips open and four precise cuts are made on her torso, instantly pooling up with blood. Rod turns the light on as Tina’s body rises off the bed, whirling around in the air and knocking Rod into the corner of the room.

He’s dazed and sees Tina being dragged up wall by some invisible force, screaming for help.

This is the moment when you forget what you’ve seen in horror movies before. Because

what you’re watching, is terror of another kind. The inescapable force of a monster who attacks when you’re at your most vulnerable. And there’s nothing you can do about it.

Rod remains dazed in the corner, reaching out for Tina as her bloodied body is being dragged across the ceiling. Nancy hears Tina’s screams and jumps out of bed.

Then death comes for Tina as her body falls lifelessly onto the bed, crashing down from the ceiling into a pool of blood that splashes across her lover’s body. This is the most surreal experience in horror history. A feat that has never been matched or duplicated, and to this day remains one of the highest points in horror history.

Well. that wraps up this list, folks! I’ve had a blast doing this and I hope you’ve enjoyed reading along. Meanwhile, I’ll come up with another project so stay tuned for more posts.

Editor’s note: In a previous post I mentioned one particular omission from this list that generally shows up on compilations like these, but I neglected to name the scene: the chest-bursting scene from Alien (1979). I love the scene, but I feel like it’s so embedded in the pop culture lexicon that it doesn’t register for me. If I had seen the film when I was a kid perhaps I would have been more affected, but by the time I watched the movie I was well aware of that scene. Especially since I had seen Spaceballs (1987) waaaayyyyyy before I saw Alien. No disrespect, but it didn’t hit home for me for tangential reasons.