Hey, folks! I’m back with #21 on my list of The Best Horror Movie Kills of All-Time: the plaster suffocation death in Tourist Trap (1979).

The world has gone to hell since the last time I posted, but I’m going to continue this list. Maybe there are people out there looking for an escape from everything going on outside, and facing fears can sometimes be a good thing. Films have an amazing power to help in times of need, even horror films. If you’re stuck at home, perhaps some of these films will be new to you and give you an idea for something to stream while in isolation. Or, maybe they’re films you haven’t watched in a while and you want to revisit.

Or, more simply, you might just want to watch some of these scenes even if you do or don’t know these films very well, and feel free to drop a comment either way. I’ll gladly discuss these (or any other) flicks with others. Let’s make this time of physical isolation, immobility, and fear a time of connection.

Ok, enough of that stuff. Let’s get to the kill!

This is the first time I’ve feature a female death at the sadistic hands of a murderous man, and even though I’m only on my 5th death scene, that seems odd. When you think of horror you generally equate female suffering and a heavy dose of misogyny as part-and-parcel of the genre, but so far I’ve featured only men for my picks #25-#23, and the woman killed in #22 commits suicide via devilish mind control.

Another thing to note, this is another bloodless kill and another from a 70’s film. The 80’s were really when the blood and gore took off in the American films, but you could find plenty of bloody kills in the Italian giallo movies from the 70’s. It seems it just took US filmmakers a little while to catch on.

And my last note: this is a personal pick because I am TERRIFIED of being suffocated. Like, I watch this scene and I have trouble breathing, along with crippling anxiety and fear of this very thing happening to me. I have the same reaction to people being buried alive, and if you were to ask me what my #1 irrational fear is I would 100% say being buried alive. I know it’s unlikely to happen, but it’s not implausible. When we were kids my older brother used to put a pillow over my face and smother me until I had almost completely freaked out, so I’m pretty sure this was a learned fear. And what are older brothers for if not to enact terrors in your childhood that will affect the fears you have as an adult?

Thankfully, the character in peril here is not me, it’s Tina (Dawn Jeffory), who is not a member of the primary cast. She is not featured until this scene and has no connection to 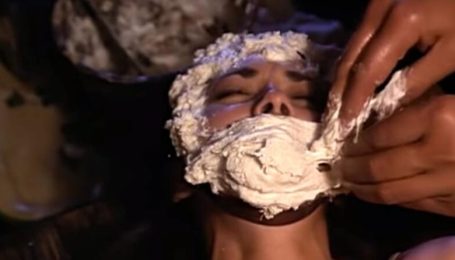 the characters we’re following in the film. But, the way in which the creepy masked killer goes about his business makes it very effective, even without any empathetic relationship to Tina. He narrates the entire process and the emotions, fears, and physical duress she will endure during the kill like he was giving a YouTube tutorial.

The killer here is, presumably, “Davey”, the brother of Mr. Slausen (Chuck Connors), who is the owner of a rundown roadside attraction, “Slausen’s Lost Oasis”, where our group of unlucky teens (?) finds themselves stuck at after their car breaks down (of course). The museum is filled with mannequins and animated puppets, both of which register pretty high on the creepy scale. As is the case in many slasher films, the kids start going missing one-by-one, having been dispatched by Davey’s frightening telekinetic abilities. But, for this kill, Davey doesn’t employ his powers, instead choosing to kill her with his bare hands.

He straps Tina’s head down with a piece of leather and nails it to the table, definitely implying that he’s done this before and this is how he accumulated all of the frightening mannequins at “Slausen’s Lost Oasis”. Then he carefully puts the plaster on her face,

starting with the outside edges and working his way towards her eyes, mouth, and (last of all) her nose, thus completely cutting off her ability to breathe. Cripes, even typing those words is enough to raise my heart rate. And it doesn’t help that there is a heartbeat interspersed with the music about halfway through this scene that becomes very rapid by the end, which is a brilliantly used weapon of coercion the filmmakers employed.

Just before he seals up her last remaining orifice of respiration, Davey utters these chilling words:

“You’ll burst from fright before you lose consciousness.”

Which proceeds to come true, both with the character and on a personal level (though I nearly lost consciousness, too). Again, this is a bloodless kill that is done to perfection. No need for any crazy gore or special effects, just a visceral kill that makes the audience full participants in Tina’s inherent fear. This film is more of a cult classic and is not widely known by general audiences, so maybe some of you haven’t seen this at all and, therefore, I’ll make this a recommendation of mine. Watch the film if you haven’t seen it (it’s streaming on Shudder) because it’s genuinely a creepy little flick, and then come back and read this and see if you agree with me.

Ok, enjoy the video and check back on Thursday to see what #20 is on my list of the Best Horror Movie Kills of All-Time!

Found an absolute gem at the secondhand shop the other day! 🛸
A tradition unlike any other - Happy ROTLD Day!! 🧟‍♂️🧟‍♀️
Fellow collectors and physical media friends...💿
Be still my heart...
Lurking behind this energetic, bubbly exterior is a murderous mama bear willing to blow the house up and leave dad in the dust for her daughters. We all need a Pam in our lives.
A couple of newer aquisitions and proof that I have at least part of a face 🧐 #allforehead
"Ahoy, matey's!"
Happy Easter 🐰