The 1970’s introduced the world to several historically notable horror films, including The Texas Chainsaw Massacre, The Exorcist and Halloween, each cementing their status as bona fide classic with critics and audiences alike. One of the key elements in each of these films is they’re almost bloodless, unlike their progeny whose primary focus became about how much blood you can possibly use in one film. They’re all just as effective, if not more so, at conveying a visceral fear of death.

The Omen actually has more than one great death scene. I wound up choosing between two scenes, and each of them has a bloodless kill that is still amazingly effective and scary. Father Brennan being turned into a priest-kebab is a fantastic

scene, but I chose the nanny’s death for this list because it affected me more than the priest’s death.

Things start to get weird at Damien’s birthday party, and the nanny gets…hypnotized…by a…dog….? It is unclear what’s going on there. All I know is this: she has a stare-down with that dog and then she wanders back to the house to kill herself.

The camera doesn’t follow her, though. It focuses on the party and we get a montage of Damien, his friends, and his folks having a good ol’ time….until somebody notices the nanny standing out on the ledge near the top of a three-story house.

She radiates up there with a giant smile on her face and a tight noose around her neck, and utters the words:

Look at me Damien! It’s all for you! 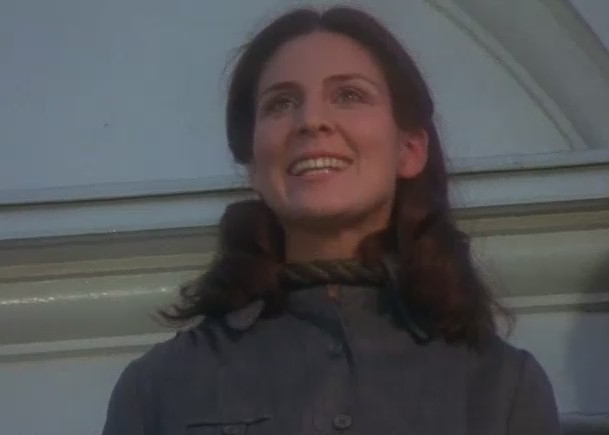 Then she proceeds to jump off the ledge and BAM! She breaks her neck instantly. And just for good measure, she crashes into a huge window, shattering it completely. You can almost feel that rope snapping right when it goes taut. It’s so sudden and brutal.

It’s also that horror of realizing you don’t have control of your own body or thoughts, which is a terrifying thing when you think about it. OR maybe I just find it creepy that Damien could take control of a person and make them commit suicide with a smile on their face? That evil little bastard.

Ok, enjoy the video and check back on Monday to see what #21 is on my list of the Best Horror Movie Kills of All-Time!