I honestly don’t feel that knowing certain details would spoil the richness of the film, but for those concerned with detail: *spoilers* 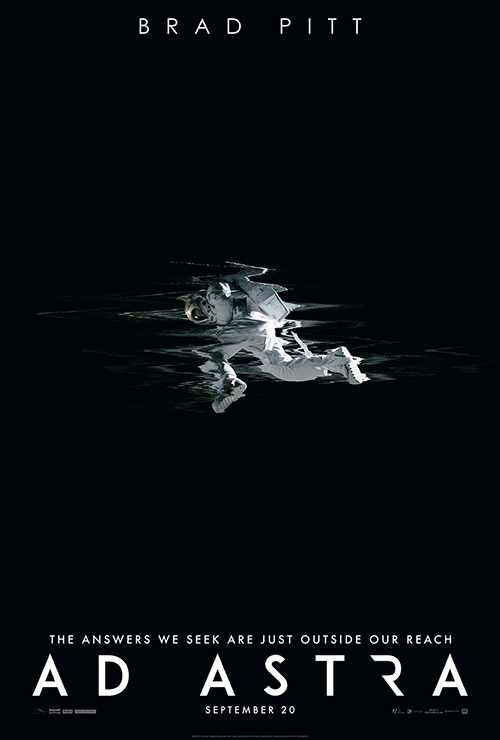 James Gray’s latest film, the contemplative sci-fi epic, Ad Astra, was received upon release with only a quiet murmur; largely praised by critics but forgotten too quickly in favor of a certain evil clown (and I’m not talking about the sewer-dwelling, child-eating clown). What most people missed is a brilliant re-telling of a familiar story that asks some prescient questions about contemporary society, the survival of the entire human race, and the role we play as individuals within this larger system.

And this film shows the progression of humanity into a MUCH larger system: that of our own solar system. (Ad Astra is Latin for “to the stars”) 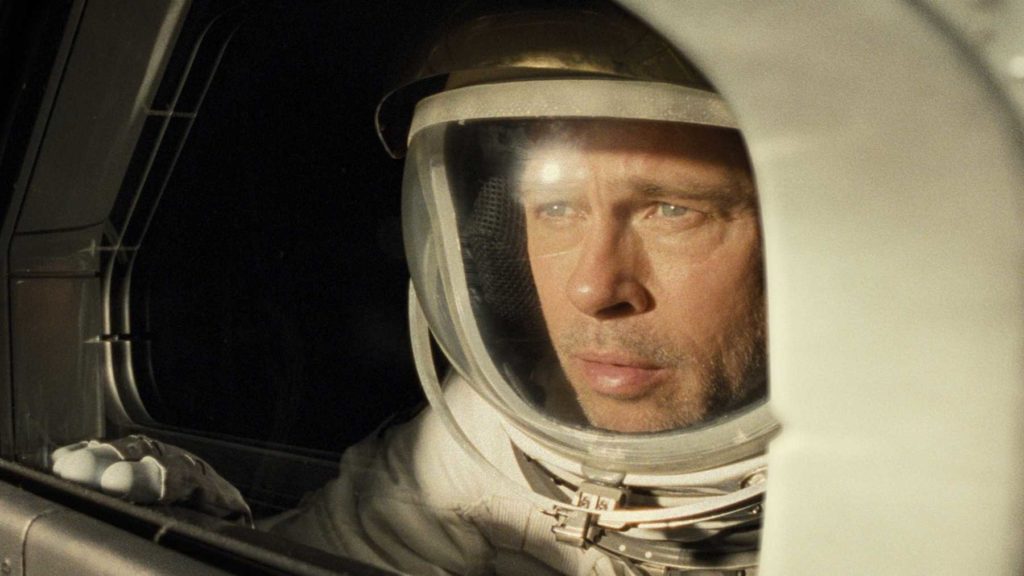 Maj. Roy McBride (Brad Pitt) is an astronaut in what the prologue calls “the near future”. In this future, mankind has colonized the moon and parts of Mars, with “flights” going between the Earth and the moon (complete with in-flight up-charges on amenities), as well as shuttles to Mars. Roy, a man known for his calm, collected demeanor, is tasked with traveling out into space, beyond the edges of our settlements on Mars, in search of his legendary father, H. Clifford McBride (Tommy Lee Jones), who spearheaded a mission into deep space to find intelligent life in the cosmos several years ago and is now presumed dead. In a breathtaking opening sequence, cataclysmic electrical surges begin hitting the Earth (nearly killing Roy in the process), and it is determined that the source of these surges is a space station out in the far reaches of our solar system near Neptune. It is believed that the space station may be the same one manned by the elder McBride, which was thought to be lost years before.

First off, bravo to Brad Pitt and his stoic but nuanced performance as a man who is abandoned by his hero, his father, yet remains metaphysically tethered to him for better or for (mostly) worse. Pitt has been underappreciated his entire career and it’s sad to me that more people don’t mention his name when discussing his generation’s finest actors.

And, make no mistake, this is Brad Pitt’s movie. Gray creates this fascinating yet morose vision of the future of humanity and it’s self-destructive complexion, and it feels real and almost normal. Gray doesn’t waste time showing off cool new science gadgets or any kind of new society where humans have evolved. The narrative only allows us to see Roy’s perspective, right down to Pitt’s sullen narration that floats 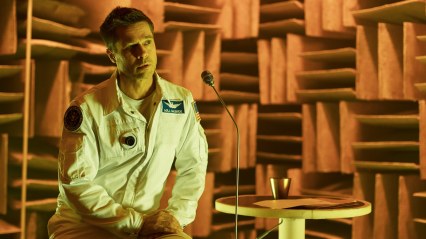 like a feather from the speakers and nestles gently in your ear. Simply put, we are privy to Roy’s motives, but we are left to draw our own conclusions about the motives of others and society as a whole.

Roy is the embodiment of the famous quote, “The sins of the father shall be visited upon the sons”, which in and of itself is not new or super interesting, but these overarching themes of masculinity and father-son bonds are merely the surface of the film. I mean, that’s what the film is “about”, if I may use such a dubious term. Roy is distant, only focused on his work and unable to open himself up to others, namely his estranged wife, Eve (Liv Tyler), much in the same way his father devoted his life to his work by abandoning his family.

Pitt’s version of Roy is an avatar for the emotionless, career-driven male archetype who wishes to live up to the masculine example set forth by his father. Much like the quiet, morose gunslinger in Westerns, he is a man who has walled off the emotional part of his life and of his own being. This appears to be where the character draws his power, which is a common take on the archetype. There is even a scene where Roy is being driven via military escort across part of the moon when the convoy is attacked by pirates and Roy has to save the day, much like the introverted gunslinger fighting off the bandits in an old Western. Because of his dedication and focus to his task, only he is able to neutralize the threat, as if to say this type of character derives power by refusing to feel emotions.

Using familiar character types (Roy) and narrative set-ups (violence and capitalistic structures), Gray paints the evolution of the human race as one that fears for its existence, but is unable to get out of its own way.

And the McBride’s are no different. We are a race that craves connection (see also: social media), and in H. Clifford McBride’s case, he no longer finds comfort in humanity and yearns for connection beyond the human race.

This paints the elder McBride in familiar narrative terms. He is essentially playing the “Col. Kurtz” character from Joseph Conrad’s Heart of Darkness (see also: Apocalypse Now); he has left civilization behind and becomes engulfed, nay, mad, with his own selfish desires. Gray layers that one-dimensional human physiology by adding the father-son dynamic while asking the well-worn question: will we ever learn from our mistakes? 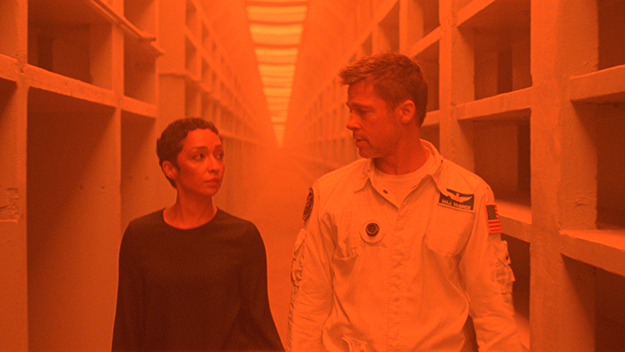 These tropes have been used many times over in fiction, so the set-up is nothing we haven’t seen before. However, Gray’s canvas isn’t comprised of broad strokes and simple ideas, but rather with finite detail and minutia. Roy’s mission is both obvious and clouded, even to himself. The plot is a simple set-up but Gray unwinds the ball of string at just the right pace, revealing some powerful statements about politics, science, religion, and the ineptitude of humanity to exist without violence and destruction.

To wit, Gray makes deliberate efforts to highlight that science and Christianity both inhabit a space within this futuristic narrative frame-work. Before taking off on their mission to Mars the crew say a prayer to Saint Christopher. And when the mission takes casualties, the surviving crew members pray over the corpse before jettisoning the body into the infinite coldness of space. They say kind and reverent words one minute, then dump the body out the window the next minute. Is this a possible commentary on the unsympathetic, and what some people would call pointless, rituals of Christianity?

Possibly so, but the film takes careful measures to display the destructive power of science, as well. The electrical surges that threaten the fate of the human race, as well as that of our solar system, are born from our efforts to study and explore the outer regions of space. To what end are these “science experiments” being used? It doesn’t take much of a deep dive into the film to see that scientific exploration has 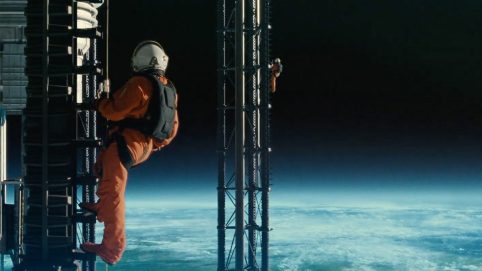 only expanded the proliferation of capitalism. Booking flights to the moon, paying $125 for a blanket and pillow on the flight, colonization, the threat of piracy, et al, are all signs that point to the financial agenda of those that would push for this type of exploration. There’s money to be made in space.

From this description, it would seem like the film is drab and didactic, but very little of this is superficial characterization. There’s a definite subtext about the finite nature of our race, but, in the end, Gray’s futuristic conclusion is much brighter than that.

My favorite exchange happens near the end, when Roy finally encounters his father after so long. (I have a theory about if his father is actually a person or an abstract, but that’s for another time). Roy is asking his father to come with him back to earth, which he declines, and then the following exchange occurs:

H. Clifford McBride: We need to find what science tells us is impossible. I can’t have failed.
Roy McBride: Dad, you haven’t. Now we know. We’re all we’ve got.

You can call it schlocky or ham-handed affectation, but the film earns this exchange and, especially, that last line.

I really can’t wait to watch the film again as it is as beautifully photographed as it is wonderfully written. The colors and geometrical imagery are awe-inspiring and complement the world that has been so carefully crafted before our very own eyes.

In the end, James Gray has constructed a reflective piece of film art that I hope will be looked at well beyond this year’s awards shows and the like. I think it would be interesting to compile a massive database of futuristic scenarios posited by different films like this and try to learn about ourselves through these fictional ideations. Art reflects life. Gray’s take may seem bleak and singularly terrifying, but there’s some hope in the end. And I’ll gladly take a nice helping of hope.