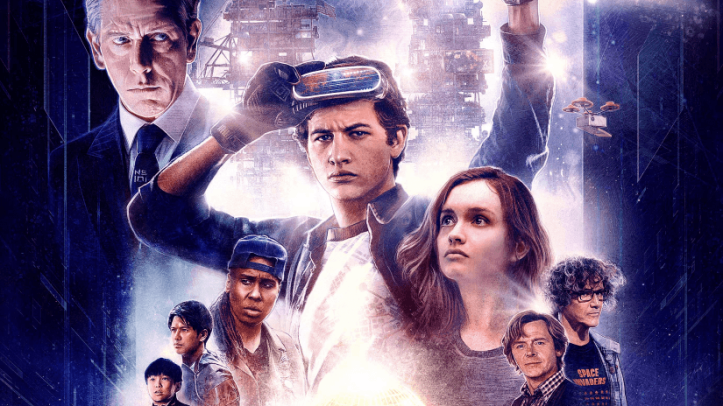 Movies based on books rarely turn out better than the book, but when the book is a much-maligned (by the pseudo-intellectual, at least) piece of pop-culture pulp and the movie adaptation is directed by Steven Spielberg, something has to give. Having read the book and finding it to be simple entertainment directed at gamers and pop-culture fiends, and now having seen the movie, I’d have to say the movie is basically the same as the book with a few flourishes to elevate it.

The movie is an excuse to visually render the virtual reality world that has taken over the world consciousness in Ernest Cline’s novel. The VR space, known as “The Oasis”, is a second-life habitat with innumerable lands and themed environments mostly related to 80’s pop-culture created by a reclusive, awkward, benevolent genius who was infatuated with the era, thus creating a nostalgic outlet with which to escape the reality of 2045. We know little of the real world except that it’s become a dystopian mess and no one knows anyone except through their Oasis avatar alter-egos.

The conflict of the movie has already been set in motion by the time we get introduced to our hero, Wade “Parzival” Watts: the creator of the Oasis, James Halladay, died in 2040 and created a competition to test the intellect of the gamers to find three hidden keys and eventually an end-game Easter Egg. The finder of the Easter Egg would be given Halladay’s stake in the company that runs the Oasis and, essentially, total control of the Oasis. 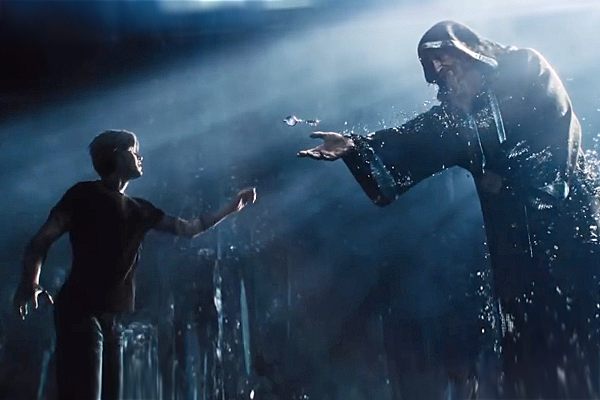 This quest serves one purpose: to show as much of the 1980’s as possible and have our heroes square-off against an evil corporation, IOI, and their corporate scum-bag leader, Sorrento, who uses and army of IOI employees to search the Oasis for the egg so they can take control. It’s an 80’s anti-capitalism theme that essentially screams “Greed is NOT good!”

Sadly, that’s pretty much the movie. It has so much kinetic energy and visual flair that it never takes a moment to breathe and tell us about the world or our heroes, Parzival, Aech, Art3mis, Sho, and Daito, (the latter two only feature prominently in the third act) code named the “High Five”. Spielberg is no stranger to emotional manipulation and this movie attempts to transport us to a simpler time when a story about five heroes taking on an evil corporation needed little more than some inventive action and a healthy injection of heroic moments and emotional speeches. With a story that takes place in a world where, seemingly, everything has gone so wrong that people spend their entire lives in a false reality, how are we supposed to forget that things are shitty no matter who wins the egg?

The movie keeps it simple, much as the book did, which is a shame when there are deeper themes that could have been explored. It’s like the filmmakers read the book and thought “We could make this look SO COOL!”, without giving a second thought to exploring the psychosis of a world where no one lives in reality anymore. Spielberg gambled on throwing enough pop iconography against the wall and letting the masses have their little gleeful moment when they saw their favorite character pop up for a second. The Iron Giant, Akira, Michael Jackson, Freddy Krueger, Marvin the Martian, Halo, King Kong….they’re all in there. They opted for the crowd-pleaser narrative that dodges real-world implications and focuses on childish interests like keeping the Oasis free of advertisements.

There’s a theme of corporate “slavery” that could have been explored as well. The IOI company runs these indentured service centers for people who have a debt to the company and they use these “servants” to do the dirty work in the Oasis. The ramifications of this project are never explored, nor is it explained as to how this is legal even in this miserable world. There are so many more interesting elements of a world where the reality is irretrievably tied to a virtual reality than just showing a Delorean and Mecha-Godzilla so we can go see and remember these creations from our pop-culture past.

On the brighter side, there is a sequence in the middle of the film that stands alone as an incredible feat that thrilled me to my very core. I won’t spoil it but it’s truly a special sequence for cinema lovers and I could have spent an entire movie inside this particular place.

On the surface Ready Player One is a story that attempts to teach us that our actual reality is better than a virtual one. In this sense you could say the movie is anti-movie and anti-video-game, except it never goes so far as to explore anything beyond this superficial level. The concession at the end of the movie is such a condescension to everything we just watched that it almost feels like there was no purpose to the movie. And, clearly, Spielberg never intended this movie to have a purpose except to please the audience and remove them from reality and transport them to a different place.