Every once in a while a genre movie reminds us of what intelligent cinema looks like and they make ideas come to life. The turbulence of our current domestic and international waters is to thank for that. Never in our history have we had more ways of communicating with one another, yet the gap in real understanding continues to widen.  I’m not going to say Arrival is a poignant reminder of what art can show us about our shortcomings, but it sure makes a great effort.

Arrival is a film about communication and language. It tells the story of alien contact through the interaction of a linguist and a foreign species over the course of an undefined amount of time. The metaphor of aliens is fairly obvious: they represent the “other” that we don’t know. The question of a film like this is, how do we get to understand the “other”? The film posits the importance of language as well as science in establishing a connection. 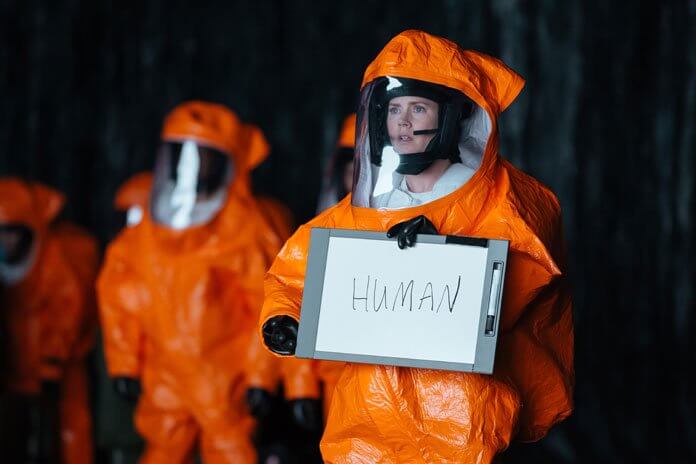 While there is certainly a scientific aspect to the film there are few scenes of expository science jargon to bog down the script, unlike most sci-fi films. It is interesting to note that the supporting protagonist is a theoretical physicist, as in, he’s more about ideas than concrete physics, much the same as the film, itself.  There is a physical military presence throughout the film to clash with the philosophical aspects but, thankfully, the film steers away from the clichéd military vs. science conflict for the most part and keeps the physical tension as mostly a B plot device to raise the stakes for our protagonists.

What the film does best is breeze past much of the science and breakdown the ideas of language as the source of conflict. Aliens have their own form of communication, as do humans. And not even that, amongst humans there is a dearth of communication forms ranging from spoken languages to body language and cultural traditions.

It’s here where the thesis of the film crumbles away a little bit. The school of philosophy centered on knowledge is known as epistemology. This school has formed theories on our association of the “other” and how they are represented. The basics of epistemology are: what do we know and how do we know. When it comes to the “other” our only way of knowing is through the prism of our foundations. Our own culture shapes our views of the world and they are unmistakably part of the foundation of our knowledge. So the question to be asked is, is it possible to understand the “other”?

I can watch 10,000 Japanese movies and break them down frame by frame and inject knowledge of Japanese history, customs and art, yet still the analysis is framed through a window of Western culture. I grew up in America. And as such, I am unable to view a Japanese film as a Japanese person would.

The resolution of Arrival includes an assimilation of culture between the aliens and the protagonist.  Amy Adams’ linguist learns to understand their language and is able to think the way they do, in non-linear terms, thus preventing a global war. Using the previous example, this would be the equivalent of an American learning the Japanese language and immediately being capable of thinking the same way a Japanese person thinks. It is true that the structure of language dictates the way we process our thoughts. The subject-predicate structure varies from language to language and invariably affects information processes. For example, think of how Yoda from “Star Wars” speaks. There are many languages that translate in a similar structure showing a different emphasis in sentence arrangement.

Maybe this is just a nitpick but I have visions of philosophers watching this film and scoffing at the simplified presentation of the “other”. It would be arrogant to assume we can comprehend the nature of another culture by simply learning their language, but it’s certainly a great first step in learning to know and accept others through our own prisms of understanding.

I’m not meaning to detract from the point of the film. Each and every one of us needs to exercise empathy and try to understand others and their modes of thinking and communicating. The simplified view expressed in Arrival is an idealistic version of how important it can be to communicate with cultures we are unfamiliar with. For that reason, the film has a worth beyond the performances and technical aspects, which is rare in a genre movie.