I stated in my Inside Out review that I really don’t like to critique kids films. They tend to not strive for technical or narrative brilliance (unless it’s Pixar) so it seems silly to pick them apart. But, since I haven’t watched a newer movie in quite some time I’ll come up with some words about a kids flick.

All in all, I dug Paranorman. It doesn’t feature the narrative arc that every other kids movie has where the kid has to discover something about him/herself in order to achieve the goal of the film. There’s a little bit of that in here but it’s not the defining arc. In this movie Norman stays virtually the same throughout the film (for the uninitiated, he can see and speak to ghosts). The film actually critiques the townspeople who don’t believe in his gift and constantly pick on Norman and think he’s a freak. So I suppose you could find an interesting connection to horror films, which this film is a derivative of. In most horror films there’s something or someone threatening to kill or destroy people or the environment or whatever the case may be, and there’s always one person who figures it out and no one believes them until the end. But usually by then all of those people are dead, but we all know they had it coming. Humorously, Norman is shown watching horror movies throughout the film and appears entranced yet unaffected by them. Such is the life of the weird kid (yours truly included).

The horror homages throughout are definitely a treat for any fan of the genre. I can’t honestly recall every tip of the hat but there is one shot that humorously parodies Halloween and Friday the 13th in the same image, which I quite enjoyed. 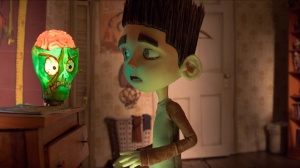 I also would like to mention the animation. I have a deep admiration for any filmmaker working in stop-motion animation, not only because of the time and effort it takes to shoot a stop motion film but because of what it adds to the story. It adds a tangible effect to the film that other types of animation can’t boast. Computer generated films are impressive because of what they can conjure up visually while coming close to realism, but because they are done entirely with a computer I find it difficult to engage fully in the animation. They’re still trying to make everything look so real, which makes me look at it in an attempt to judge the realness. I think with any kind of imagery that isn’t filmed reality you’d want the image to pull you in and not show it’s seams. Stop motion goes for an unusual look (which, for my buck, is what animation should be used for) that displays more creativity than the most realistic looking computer generated moose or elf or human.

That’s really all I have to say. It was certainly a fun flick and recommended viewing during the Halloween season.